Boeing UK Charity of the Year

SSAFA, the Armed Forces charity is the Boeing UK charity of the year 2019. 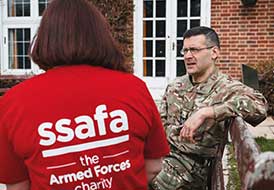